International Tabletop Day is April 11, a day to celebrate gathering together and playing tabletop games. There are a few stores that will have celebrations, where you can go and join in on tabletop fun with others in your town (you can find the nearest celebration at www.tabletopday.com) or you can celebrate in your home with your family playing the tabletop games that you have. “Tabletop games” was initially a term used for roleplaying games to differentiate a pen and paper game like Dungeons and Dragons from video games and LARPing (Live Action Role Play). But now “tabletop games” include board games, card games, pen and paper games, or pretty much any game that you play around a table. For this month’s Toy Box, I thought I’d find some tabletop games for you to break in on the 11th.

First we have Superfight. Superfight is a fun card game where players build unique fighters and a judge decides which fighter would win in the fight. In the core game there are two types of cards: white cards, which are the fighters, and black cards, which are the fighters’ attributes. Players who are fighting draw three of each card. From these cards they choose their best fighter and attribute, discarding the cards they don’t pick. Then they take turns drawing another attribute to add to the fighter that may help or hurt their fighter in the fight. Then a judge (a player who isn’t creating a fighter) comes in and decides which fighter would win. The winning fighter stays on the table and the next player tries to create a fighter to defeat them. There are other colored decks: the green deck (kid friendly cards), the red deck (adults only cards), and the orange deck (a deck for nerdy players), which contain more fighters and attributes to add to the white and black core cards (their backs are black and white so to blend in with the rest of the cards during game play but the other side is the color of the deck so they can be easily separated out). These decks can also be played separately, apart from the core deck. The blue deck adds in a location that the fighters fight in and the purple deck adds in a scenario for the fight. You can find all of the decks at superfightgame.com. The core deck costs $35 and the other decks cost $15. 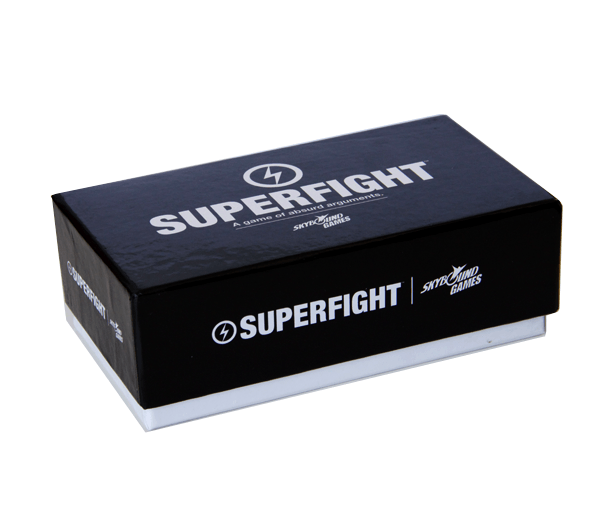 Next we have Munchkin. Munchkin is a game that is very simple. Your goal is to be the first player to level up their character to level 10. To do this you must knock down the door and fight monsters that appear behind them. If you defeat them you not onlygain a level but also treasures that will always help you. Sometimes you may not find a monster behind the door but a curse or possibly something that might help you. If you can’t defeat the monster on your own you can ask for help from other players who may help you or they may help the monster if they don’t want you to level up. The suggested ages for Munchkin are 10-15 years old but there are themed games like Adventure Time Munchkin that are suggested for 8 and up. You can find the game on Amazon. Munchkin costs $16 where Munchkin Deluxe (which comes with a board and player tokens to keep score) costs $21.

Lastly we have Scribblish. Scribblish is a party game that is much like the game telephone. Starting with one of the caption cards, players draw an image to match the caption. When time is up, they cover up their caption in their Scribble Scroll and pass it to a new player to guess what the caption is. After the picture is guessed it is covered up and the Scribble Scroll is passed to a new person to draw something to match the last player’s guess. To win, you guess which picture leads to your original scroll or get voted funniest picture or caption. The game can be found on Amazon and costs $24.

Scott’s Toy Box: The Next Generation of Video Games