It usually goes without saying that my kids’ experiences growing up are drastically different than mine were. They cannot imagine a world without streaming video. Or having a phone permanently attached to a wall (with a really long cord). Or getting to sit in the front seat of a car before being a teenager. But I didn’t realize until this spring that they even experience weather events differently.

Allow me some nostalgia. I remember that for several years when I was growing up, our school used modular buildings for classrooms, and this made for really interesting tornado warnings. Back then, administration would decide at some point that we needed to be evacuated to the main building, which had lovely cinderblock hallways. This evacuation usually happened when the weather had already gotten pretty bad, so the principal had to come out into the storm to retrieve us and then lead all of us back to the main building. One time, the wind turned the principal’s enormous golf umbrella inside out, and he barreled down the sidewalk faster than I’ve ever seen a principal run. I still laugh thinking about it.

For better for worse, my kids will never see their principal sprinting ahead of them through tornadic conditions. They don’t even know how to sit up against the cinderblock wall properly with their heads tucked down to protect them from the cinderblock. If there’s severe weather in the forecast, their schools cancel in advance.

Our schools had an early dismissal for weather back in March. I left work before lunch and headed home to be there with my wife and kids, and on the way, I stopped by the store to get some milk and bread, just like everyone else in Clinton. While at Wal-Mart, a tornado was seen in the area, and the staff moved everyone in the whole store into the “safe area” behind the electronics section. If you’ve never had the experience of waiting out a tornado in the back of a Wal-Mart, let me just tell you. The whole scenario is a sitcom waiting to happen. Nowhere will you find such a cosmopolitan mix of people in central Mississippi than in a Wal-Mart tornado drill.

The workers tried their best to corral the people. Several customers exhibited saintly patience, as if this was exactly what they had planned to do that afternoon. Some restless customers constantly threatened to just leave the store in spite of the twister ripping through the parking lot. The young people were locked into Instagram. A few of us had our weather maps on our phone and keep showing them to each other saying, “Oh, look. It’s bad out there.” And some folks who couldn’t figure out how to load a weather map simply called their loved ones and asked, “Is it bad out there?” (I assume the response went something like, “Yeah, there’s a tornado.”) Several times, I found myself awkwardly standing with strangers and feeling the need to speak: “Well, what brings you here?” “I just stopped for milk and bread.” “Me too. And brownie mix.”

We were eventually “released” by Wal-Mart management who determined that the imminent threat was over and that there was just rain now. So I tore out of there to the first-check out aisle before management changed their minds. When I got home, I pushed through our mudroom door into my own home’s “safe place,” where all my kids were sitting on pillows and blankets while watching iPads. To them, this was the best day ever. Thinking back to my own tornado days as a kid and knowing the great lengths that had been taken to protect my kids, all I could muster to say was, “You’re not even assuming the cinderblock position!” 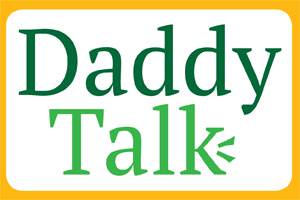 Daddy Talk: What Happens During the Night

Daddy Talk: To Sleep or Not to Sleep

Daddy Talk: Lessons in Growing Up