Growth Spurts: All Dressed Up

In our family, we don’t go all out for Halloween. We do think it’s fun to get dressed up in costumes and go ask our neighbors to give us candy, but that’s about the extent of it. Oh, and we carve pumpkins. We aren’t really into all the scary stuff. We don’t decorate with cobwebs, unless you count the ones that form naturally in and around our house (And, by the way, please don’t.). We don’t turn our front yard into a cemetery or hang ghosts on the front porch. We don’t even plan out our costumes way in advance. In fact, we’re usually scavenging in closets, drawers, and hampers on the afternoon of October 31st for pieces to complete our costume puzzles. 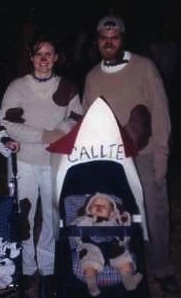 Actually, I should back up here. I confess that I did put some effort into my firstborn’s first Halloween ensemble. We had a really cute puppy dog costume for her, and I thought it would be fun to turn us into an entire dog family. So I cut various sizes of “spots” out of dark brown felt and pinned them to my husband’s and my khaki pants and tan shirts and then used the remaining felt to create dog ears, which I attached to either side of Kevin’s baseball hat and to each of the pigtails on my head. (Sorry for the mixed animal images there.) I had invested in dog collars for Kevin and myself, so we wore those and also donned noses painted black with eyeliner.

But I didn’t stop there. Since Callie was not even a year old, she would be riding around that evening in her stroller. But it couldn’t be just any stroller, now, could it? Don’t worry–I didn’t buy a new stroller. I just dressed up the one we already possessed. Using three pieces of white poster board for walls and one piece of red poster board for a roof, I created a dog house around Callie’s stroller seat. I even drew shingles on the roof and wrote “CALLIE” over the door in the front, where she peeked out at everyone. I’m not gonna lie; it was cute. But did I mention that Callie wasn’t even a year old?! Yeah, this was totally just for me and my camera to enjoy. 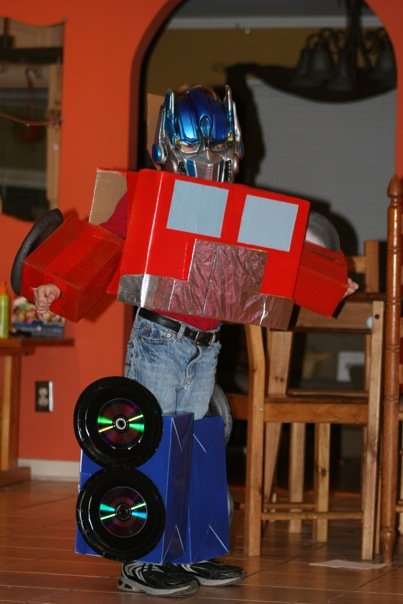 My husband has had his moments, though, too. A few years ago, my son wanted to dress up as the Transformer Optimus Prime, so Kevin went to work on it. A few boxes, paper plates, blank DVDs, construction paper, aluminum foil, and red and blue paint later…Caleb’s costume would’ve made Hasbro proud. And, I’ll admit it–the Transformer costume put my Pound Puppies family to shame. 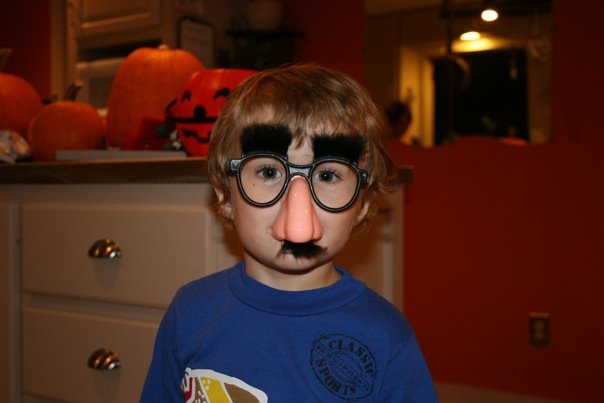 But seriously, other than these instances, our costumes are pretty thrown together. We’ve gotten a lot of miles out of our girls’ dance and gymnast attire. My son’s year-round love of football equipped him with a Drew Brees costume one year (or two…). Maybe my favorite costume was of my son’s making; he put on regular clothes, found some Groucho Marx glasses to wear, and announced that he was going as “Funny Boy.” Classic choice. 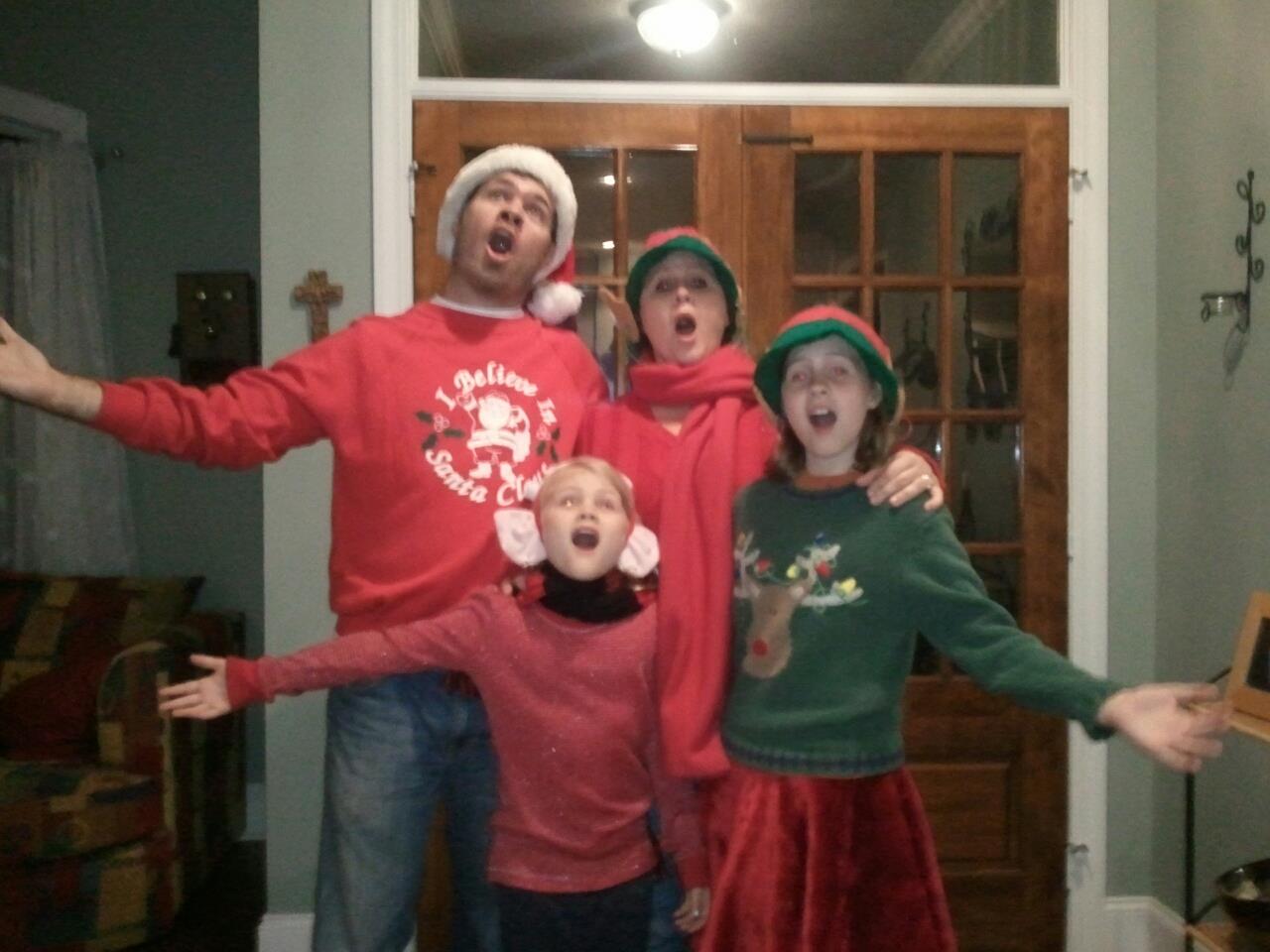 Last year 4/5 of us dressed up as Christmas carolers, because we thought it would be funny/confusing/ironic. (It was to us, anyway.) My son Caleb opted out, though, and instead went as the Headless Horseman, which was pretty hilarious. He borrowed one of my husband’s jackets, buttoned it up over the top of his head, and stuck a plastic pumpkin bucket (which we rigged with his sister’s headband) on top of his head. He spent the eveninggoing door to door and simply tipping his head toward people for them to put the candy in his “head.” So good. 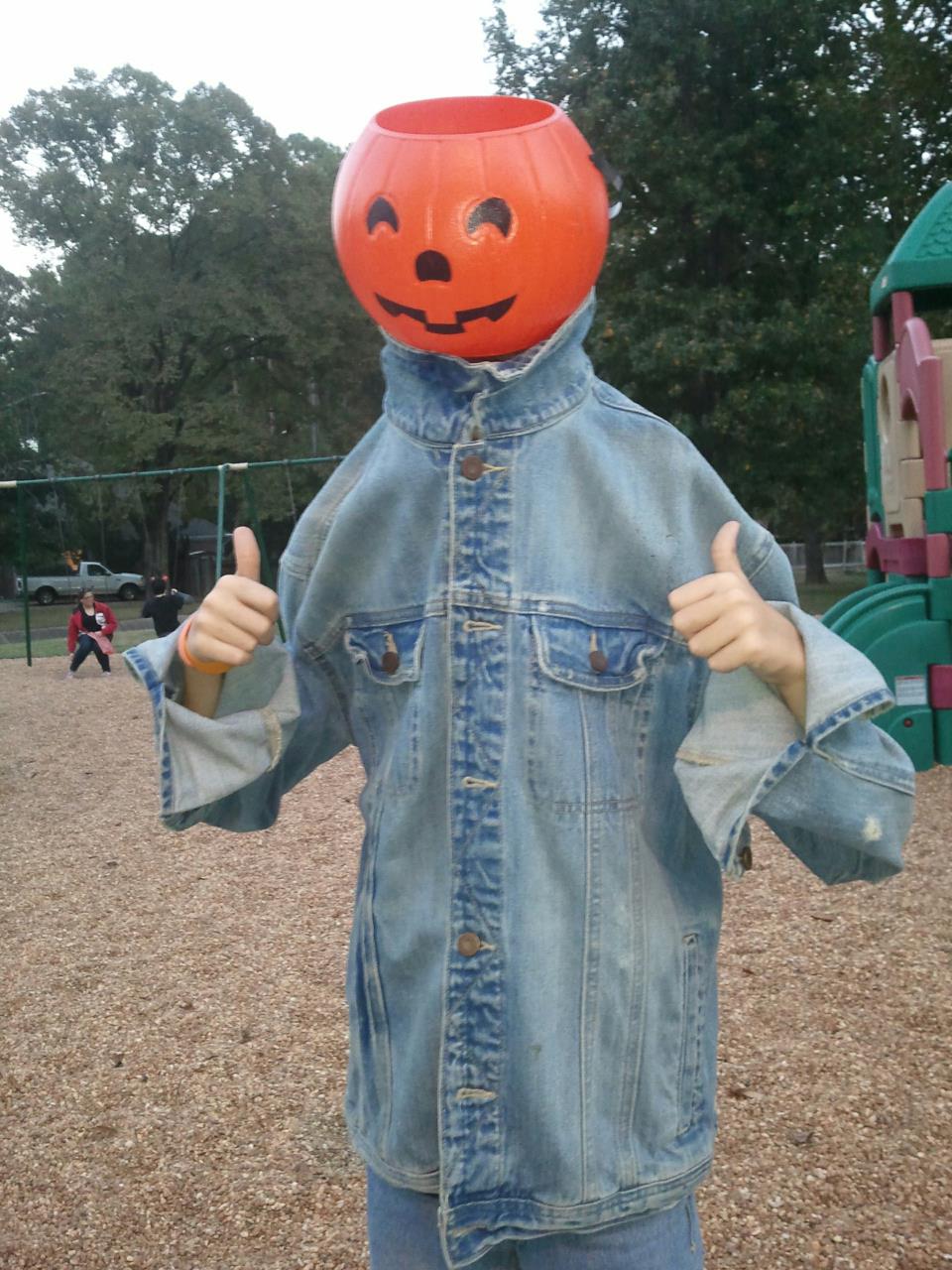 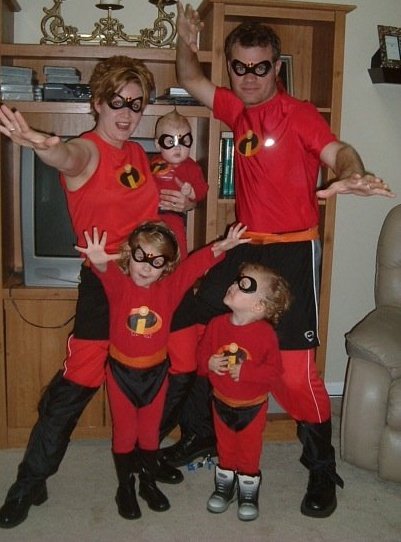 I think our best year for costumes came when my youngest was a baby, and the five of us dressed up as The Incredibles. With some resourcefulness and creativity, we pulled off some pretty good-looking homemade superhero costumes, if we do say so ourselves!

Okay, so maybe we do get into the costume part of Halloween, even when it’s done at the last minute. It’s just something silly and fun that our whole family enjoys doing together. And since our costumes, for the most part, are do-it-yourself, we are also putting our creativity to work.

Creativity, resourcefulness, thriftiness, togetherness…Whether you go trick-or-treating, go to a Fall Festival, or just stay at home, give these things a try this year! You might get more out of it than just candy.

Carrie Bevell Partridge plans to post some photos of these costumes with the online version of this article, so be sure to check it out at www.parents-kids.com!

Growth Spurts: Kids and Their Talents