I moved to Jackson when I was 25. I had a small two-bedroom duplex and, at first, I shared it with a few roommates, but most of the time I lived there alone. One July day when my power went out and I asked people on Facebook what I should do, one of my friends suggested I build a fort. And that’s precisely what I did. With my loveseat, three sheets, and two chairs, I made a fort – one that my 8-year-old self would have enjoyed if he had the freedom of moving the furniture wherever he liked. The worst thing about my fort was that it also took up all the space in the living room. So, it was probably good that I lived alone at the time. For the Toy Box this month, I found a much better and simpler solution to building a fort, also some dino toys that are pretty awesome and a saddle for dads and kids alike.

Your living room is now safe with the Door Fort. The Door Fort connects to any door, instantly and easily transforming it into the entrance to a fire station or a princess castle. Put it on your child’s closet door and the closet becomes his fort – a fort he’ll have to keep clean to play in. Or if you have odd closet doors, it even works on a room door. The canvas material is held up by lightweight poles, reminiscent of those used to set up camping tents. The fort is held on to the door with U-shaped parts that go over the top and bottom of the door. The entrance on the Door Fort is about 4 feet high. Currently the Door Fort comes in two options: the fire station and princess castle. It is $60 and can be found at CortexToys.com.

For dinosaur lovers and those who enjoy creating their own worlds, we have Snap-Dinos. Snap-Dinos are wooden blocks with dinosaur parts painted on their sides and snaps that hold them together. The dinos are color-coded so you can put together a regular dinosaur if you connect all the same color pieces or you can play Jurassic Park and create your own multicolored dinosaurs. The set comes with 5 heads, 5 bodies, 5 tails, 3 spikes, 2 arms, and 18 legs, enough to build 5 dinosaurs. The set costs $40 and can be found at LakeshoreLearning.com. 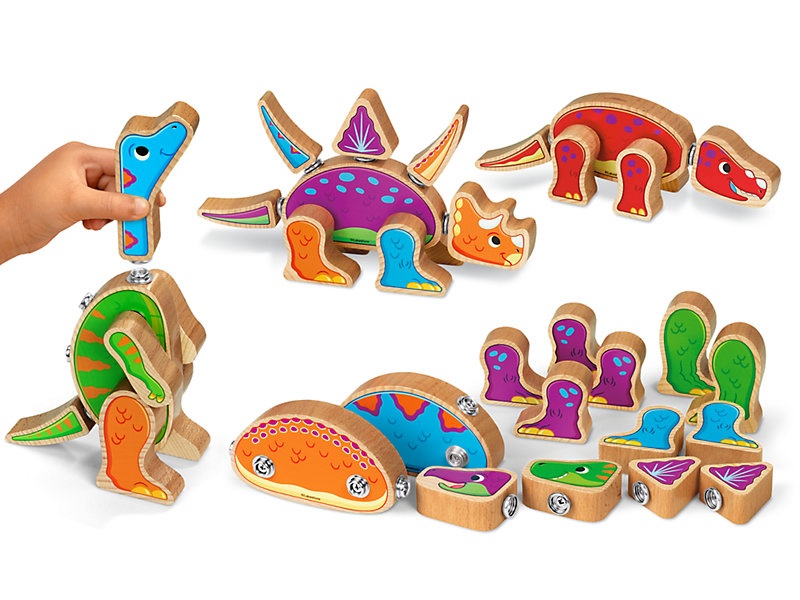 If dad gets roped into playing horsey often, have we got a saddle for you! Pony Up Daddy is a soft saddle that wraps around dad’s torso and gives your child a cushioned seat, to become a knight or a cowgirl. There is a handle to hold on to and the belt wraps tightly around, so the saddle shouldn’t slip or turn. Be sure to read how to put the saddle on and the warning label that offers instructions. There are things to be aware of to make sure this game remains safe for everyone involved. Pony Up Daddy costs $35 and can be found on PonyUpDaddy.com.