In real life one shouldn’t lie and keep secrets. However, there are a couple of games in which secret keeping is the most fun part. In most of these games, it’s your identity that you are trying to hide from the other players and the game is over once your identity is revealed. That is the focus of the games that are in the toy box this month.

First we have One Night Ultimate Werewolf. In this game, the players are part of a village but there are a couple of werewolves who are living among them. There are several other characters who live in the village as well, most of them are trying to help the village and other villagers win the game while a few are on the side of the werewolves. At the beginning of the game each player is dealt a card that is placed in front of him or her while three cards are placed in the center. Each player looks at their card so they know which character they are but leaves the card face down on the table. Then the whole village goes to sleep by closing their eyes. During the night different groups of people wake up and do things based on which character they are. For instance, the werewolves wake up to see who the other werewolf is while the troublemaker wakes up and switches two cards on the table without looking at them. There is an order in which people wake up and you can have a person not playing read through it or you can download an app on your phone that has an announcer do it for you. Once everyone in the town is awake again, accusations start flying as the village has a few minutes to cast their vote for who they think is a werewolf. Anything can be said and claimed in this phase but no one can look at any of the cards. Some people may not even be the character they were before they went to sleep due to hijinks during the night and the fact that you are always the character on the card in front of you. After a few minutes (the app includes a timer for the part of the game) everyone votes for someone they think is the werewolf by pointing at them on the count of three. At this point the person with the most votes (or the people with the most tied votes) turn over their cards. If a werewolf is chosen the village wins but if it’s someone in the village the werewolves win. One Night Ultimate Werewolf can be found on Amazon for $18.

Next we have Coup. The game takes place in a futuristic sci-fi world. With the right amount of money, you can throw a coup and take out one of your rivals. In this game players each get two cards and 2 coins at the start of the game. There are five different characters in this game, each with their own actions. When playing you can either take 1 coin to add to your pot or declare that you are one of the specific characters and do that character’s action. Some of the actions are offensive like getting you more coins or paying an assassin to take out one of your rival’s cards, while other actions are defensive that allow you to block these offensive actions. Anytime you declare that you have a certain character to use their action, the others at the table can challenge you if they don’t think that one of your two cards is that character. If you are lying and you don’t have that character then you must leave that card face up and you now have only one card to keep hidden. If you are truthful then the person who challenges you has to flip over one of their cards and you get a new card to replace the one you had the show. When you get 7 coins you can throw a coup and pay to force one of your rivals to flip over one of their cards and there isn’t anything they can do to protect them. The game ends when there is only one player with one or both of their cards still hidden. Coup is a game that can be played a couple of times in only a few minutes. You can find it on Amazon for $12.

Lastly we have Suspicion. In this board game, you play one of 10 guests who all have sticky fingers when it comes to jewels. At the start of the game you are give a card that has you character on it and two action cards. You then take turns rolling dice to move all of the characters around (the dice tell you which characters to move) and then play one of their action cards to perform both actions on it. These actions include stealing jewels, moving guests, or trying to determine who the other players are. The game ends and is scored when all the jewels of one kind have been stolen. You get 6 points for sets of jewels (one of each jewel) and 1 point for each jewel left over after that. You also get 7 points for guessing correctly who each of your opponents are. Suspicion costs $20 and can be found at Target. 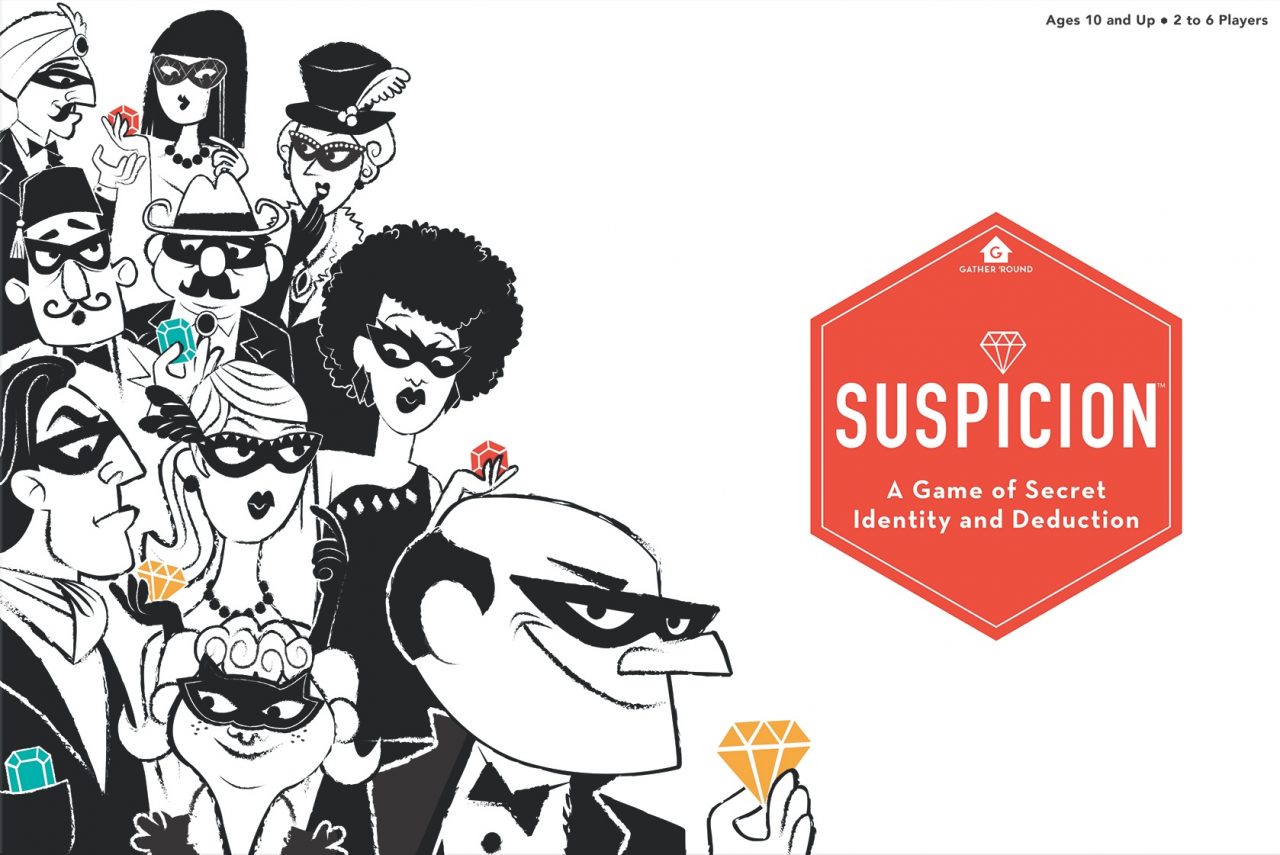