Back in March, a group of friends and I started playing Dungeons & Dragons (D&D). We try to get together when the majority of us can make it andit has quickly become one of my favorite parts of the week. On the surface, D&D can be a bit daunting since all that you need to play are several dice, about 4 people, and 3 books. But like any game, once you either see others playing it or start to play it yourself, you’ll get the hang of it. I feel that the 5th edition (known as 5e) is a great place to start. This month’s toy box is all about D&D and role-playing games (RPGs) including how they are played and how to get started playing as a family.

Games in which a player takes on the role of a character in the game are known as RPGs. D&D happens to be one of the most well known ones. A person called the Dungeon Master (DM) creates and controls everything except the characters being played by the players. They are in charge of the world in which the characters live in, the quests and journeys the characters go on, and the monsters and dangers they face. To be a good DM, it takes a bit of planning but also the ability to adapt and improv at moments in the game when players do the unexpected. The main focus of the DM is to make sure that everyone is having fun playing and to make decisions on things that might be unclear. The other players take on the role of individual characters. They choose who the character is and what kind of skills they have. They can make them good or evil, characters that follow the laws or like to cause chaos, bear knuckle fighters or magic users, a person who is claustrophobic or agoraphobic, your imagination is the limit. Everything you need to know about your character is stored on a character sheet and 5e gears you towards who your character is, they have personalities, ideals, flaws, and bonds, that you decide for your character to help you get to know them and shape their background as well as help the DM create a story that draws your character in.

Once your characters are made (which is way easier in 5e than it was in the 4th edition), there are basically two types of phases the game moves through. The first phase is role-playing. Your band of characters will go into villages and talk to townspeople (played by the DM) to find out if there are any problems that need to be fixed. It can be as simple as defeating a bandit who has taken over a building outside of town or as complicated as moving the moon back to where it’s supposed to be. A good DM will offer clues and try to help steer the group into what he has planned but never force the group to go in a certain direction (which is called railroading). Once the group comes into danger they are in the 2nd phase, combat. Combat starts when the DM tells everyone to roll a twenty-sided die (d20) for initiative; this decides the order of the fight. Starting with whoever rolled the highest, that character can move and do an action. Typically your action will be to fight. When that is the case, you’ll roll the d20 to see if you roll high enough to hit the monster. If you do, then you roll to see how much damage you inflict. If you don’t, you miss and your turn might be over. All the while the DM is playing the monsters  that have also rolled for initiative and trying to defeat the players. When damage is done, the amount of damage is taken away from the monster or characters hit points (HP). When all the monsters in combat drop to 0 HP, the combat is over. When the characters drop to 0 HP, they have to roll a d20 to stay alive. In 5e you have to roll 3 successful death saving throws to stay alive before failing 3 death saving throws. If you fail 3 times your character is dead, but you can always come backplaying a similar or completely different character, so a character’s death might be bittersweet. 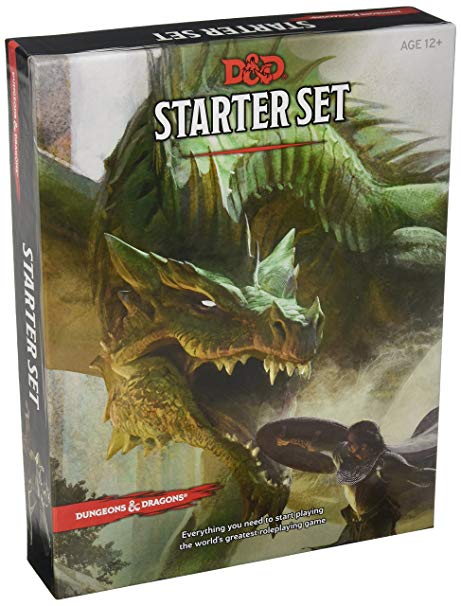 These are just the basics. The best thing to do is to just dive in but since there are three books to read, where do you start? Wizards of the Coast (the producers of D&D) have come out with the D&D Starter Set. The Starter Set contains everything you need to start playing D&D. This is great when no one interested has any experience playing the game. There are characters that are already made and an adventure book that a DM can use to run an adventure. This is perfect for getting your feet wet. After playing a bit with the Starter Set you might want to graduate to the books and make your own character and adventures. One of the best ways to figure out how to play is to watch or listen to other people playing. You can find podcasts on iTunes where people play the game by searching for Dungeons and Dragons, although most of them are probably not suitable for children to listen to, so be cautious. One of my favorites is a show called Critical Role on GeekandSundry.com. It’s a video stream that can have really long episodes (3+ hours each) and I would say is PG. They do a wonderful job of showing every aspect of the game just by playing it.

Just remember the most important part of D&D is to have fun using your imagination.