It’s Christmas time again, and if you’re anything like me, you’ve waited until after Thanksgiving to remember to do your shopping. And with this delay in time also comes a strain of expenses, so I’ve looked around and found great gifts to give your children without stepping outside of the $25 marker.

First up is Bananagrams.  Bananagrams is much like the game Scrabble. Each person takes tiles with letters on them and attempts to connect words together using shared letters. The words run vertical and horizontal, and proper names are not allowed. But this is where the similarities to Scrabble end.  In Bananagrams, each player plays on his own words, and everyone is playing at the same time.  When everyone is ready to begin, someone yells “Split!” and the players turns their tiles over to start making words with what they have.  If you have a tile you don’t want, you can yell “Dump!” and return it to the pile, but you have to take three tiles to replace the one. Once you’ve used all of the tiles in your hand (and there are still tiles in the middle), you yell “Peel!” and everyone has to draw a new tile.  If you usually win  Scrabble using “triple word score,” you won’t find any of that here.  The winner is the first one who uses all his tiles when all the tiles are gone from the middle.  You can play with two people, which can take a while to play, or you can even play with seven or more people, where games go so fast you’ll probably end up playing a couple of rounds. If you already enjoy Bananagrams, the company also sells two other tile games based on the same idea: Appletters and Pairs in Pears. All three games come in cool carrying cases that are the shape of the fruit in their names and cost around $13 on Amazon.com.

If your child is still an infant, you may want to think about getting Linus’s Security Blanket. Right from the pages of Peanuts in its signature shade of blue, Linus’s Security Blanket is soft and cozy. It’s not a very large blanket, only about a two and a half foot square, so even if you want to wrap up in it yourself (and you will), it would be about the size of a cape. However, it’s a good size for your baby or even your child’s baby doll. Also, if you attend a lot of costume parties or you’re about to put on the play You’re A Good Man, Charlie Brown, this makes the perfect costume piece to play Linus. It costs about $6 at Walgreens.

My last pick is the Crayola Color Explosion Glow Dome. This is a really neat toy. You draw on the plastic dome with the included markers, and the base lights up and spins around. There is also a flat sheet of plastic that stands in the middle that also lights up. The base uses black lights so that what’s drawn on the dome or plastic sheet glows. It comes with both a space scene and an underwater scene that you can trace onto the plastic, but you can draw anything you imagine. The glow from the dome is bright, but not too bright, so it would make a good night light without lighting the entire room. The light can be turned on to light just the dome, just the plastic sheet, or both of them, or it can be set to cycle back and forth between the two. The dome can also spin at three different speeds. If you get this for Christmas, make sure you also pick up some AA batteries. You can find it on Amazon.com for $25. 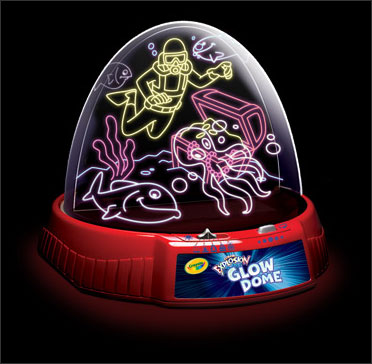