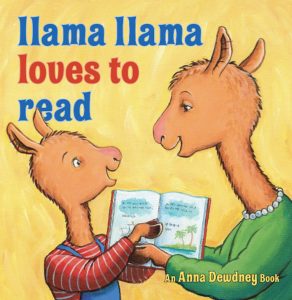 With school starting this month, Llama Llama Loves to Read would be a great book to consider for your youngster who is just starting their educational journey. This snappy little poem takes young Llama Llama through the basics of learning to read, write and the potential of doing it well.

Closely following the artistic style of the late Anna Dewdney, author/illustrator of the wildly popular Llama Llama Red Pajamas, JT Morrow’s illustrations follow the story accurately. The colorful pages are expertly rendered with hilarious expressions depicting the learning process of the alphabet. A young reader will be able to easily follow the progression of the story throughout the book.

With so many activities going on with the beginning of the school year, Llama Llama Loves to Read can be a nice compliment to the school day’s activities when read at bedtime. Not only is the story a fun read aloud poem, a youngster who is just starting school will probably have similar experiences along with young Llama Llama as he or she recounts the day’s events. What an invitation for an on–the–ball parent to discuss school and the learning process.

Book Buzz: The Best Place in the World